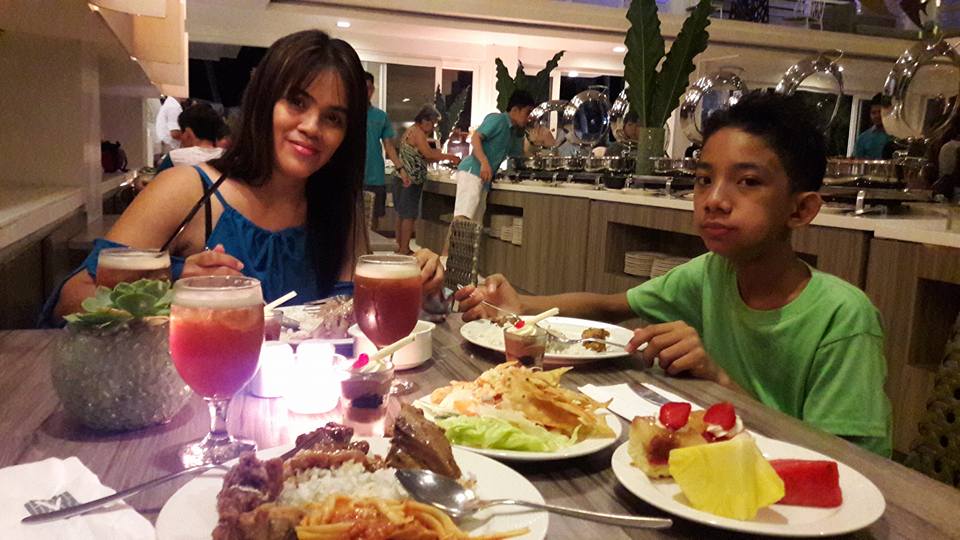 On our recent trip to Boracay, upon arrival in Kalibo Airport, a guy approached us and after a brief interrogation, he gave us a dinner buffet stub.

We already had an idea that it has something to do with membership offers, since we were invited already in 2011 (our first Boracay trip).  The guy told us that they had a soft opening of their new hotel in Station 3 (Current by Astoria) and all we have to do is just to upload pictures.  Hmmmm…. We were hesitant because 80% we knew it was about membership, but we decided to accept the dinner invitation after all, it’s TOTALLY FREE and we still have plenty of time to spend in the island (4d and 3n).

When we arrived in the hotel, a guy escorted us to our table and have us seated.  He introduced us to a lady who interviewed us (where have we checked-in, how much per night and our profession).  After the short interview, we were escorted again to another table (close to the buffet area).  Food was fine— nothing special, but not cheap.

After the dinner, the lady approached us and told us that a shuttle service will take us to their new hotel in Station 3.  I thought the possiblity of having a soft opening/launch of Current since she said she will tour us in the hotel.  I thought that she was just trying to convince us to consider their new hotel since we spent more or less P13k per night in Estacio Uno.  She even showed us around the hotel grounds of their main hotel in Station 1.

When we have reached the new hotel (Current by Astoria), I was waiting for Ms. V (the lady who was assigned to have the 90-minute presentation with us) to show us the rooms, since I thought she was just promoting their hotel.  Actually, I was even considering booking Astoria (the main hotel in Station 1) and though I DON’T really like to stay in Station 3, if only she had shown the rooms, I could have considered them for my next Boracay trip.

And so, when we went to the presentation area, Ms. V immediately informed us that she will be presenting about club membership.  Because she was honest enough, and we already had an idea about this, we patiently listened to her.  She told us that whatever will be our decision–whether we are going to avail of the club membership or not, it would be fine with her.  She started with the reason why we have decided to have a vacation.  We said, we wanted to have a break from the stressful months we had from work.  I like her style– she was DIRECT TO THE POINT (frank but not blunt).  She asked us if we can afford to pay a downpayment of P50,000 for the club membership—our answer was NO.  Then she inquired if we can afford the monthly payment of P12,000 —our answer was NO.  After few minutes of presentation, I told her that we couldn’t afford to pay for the membership because we are still building our house (second floor) and that we are maintaining a lot of credit cards so it was indeed impossible for us to say YES.  She knew she had to stop and made a last offer of a 3d/2n stay for two  in Astoria Palawan (valid for one year) for only P7,800.  The thing is we had to decide that night also, so we didn’t accept the offer.  Anyway, it’s very easy to book online.  Though we didn’t avail of theclub  membership, I am still considering Astoria Palawan on my next summer vacation.

If somebody will invite you for a free dinner/lunch buffet in Astoria, you need to devote your time.  If you really travel a lot, this membership is for you.  For me, it’s just that it’s NOT practical to pay for a membership fee wherein you can’t own the property.  Thanks for the experience anyway 🙂

Last week. I booked an overnight stay at Marco Polo Hotel to relax after my busy day at work.  Since our office is located also in the same building, it

What Happened in 2019? Hey there!  Before the New Year begins and before I set my goals for 2020, I would like to give you  a review of what happened